I’ve been a writer all my life. When I was a kid I’d write stupid little stories to make my friends laugh, and I made it through college largely by writing well enough to mask the fact that I had no clue about the subject at hand. 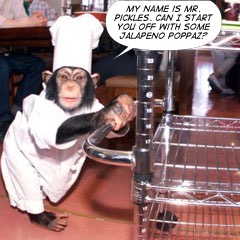 I’m also an editor and kind of a word geek (in much the same way Jeff Bezos is kind of well off), and I am always editing; you know that t-shirt that says, ”I am silently editing you?” I think that was made for me.

The downside to being a word nerd is that people make me want to tear my hair out. Additionally, doing things like banging on about idiots who misplace the adverb “only” is rough on my social life. (Friend: “Jeff, I’m having a party but I’m only inviting my non-pedantic friends.” Me: “I think you mean you’re inviting only your … hey, what the fuck is that supposed to mean?!”

While ads were once the worst abusers of the language, a challenger has arisen — it’s menu English.

I wrote earlier about an Austin food truck’s horrendous copy, but this week I stumbled across a strong contender for the language-abuse crown. It’s a South Austin Mexican/barbecue mashup joint whose name sounds like a hit song by the Eagles (no, it’s not “Make It Greasy” but that would be great title for a Weird Al joint (Al, babe, have your people call my people. Let’s chat).

Bonus points are awarded here; not content to merely ravage the English language, this joint has gone Trump-level bi-illiterate and is fucking up some Spanish, too.

Guys, here’s a thought: keep the creativity in the kitchen, not on the menu and just describe the freaking food. Oh, and hire an editor; I think you’ll find my rates more than reasonable.