Well, I don’t know about you but I am hugely relieved. First, Ashton Kutcher and Demi Moore split up, and then Kim Kardashian and her husband of 72 days divorce. In the face of heartbreak like this, I take my consolation – no matter how meager – where I can get it.

So today I rest easier knowing that Courtney Stodden’s breasts are real. 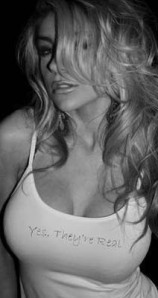 If you don’t know who she is – perhaps because you’ve been focused on bigger problems, like global warming or the state of the world economy or updating your Netflix queue – let me get you up to speed. Courtney Stodden, who is barely old enough to drive in most states, raised eyebrows when she married 51-year-old actor (and by “actor” I mean “pedophile”) Doug Hutchins. You know him? Yeah – me neither. Apparently, he’s an actor who has acted in some actor-y things. Maybe with Kim Kardashian’s ex – who knows?

She was 16 when they got hitched but somehow got around the law barring this sort of thing because the blushing bride (actually, I’ve seen pictures and I don’t think there’s much that would make her blush) had a note from her mother.

Speaking of dear old mom, Stodden’s mother was quoted as saying, “Courtney looks the most beautiful when she steps out of the shower soaking wet.” OK, marrying a dude who is literally old enough to be your dad is plenty creepy, but having your mom telling the world how hot you are post-shower? That’s just gross.

She’s been modeling since she was 12, and at 15 represented her hometown, Ocean Shores, in the Miss Washington USA Pageant. Her platform was “Skin Cancer Awareness Amongst Teens.” A curious platform, since a main cancer-prevention tip is to keep covered up. But judging by the pix I’ve seen, you’d think she’s trying for melanoma. Seriously – she could be using depleted uranium as lipstick and be safer.

She’s had to fend off reports that her looks have been surgically enhanced, but she claims, “I was born this way out of the womb.” This must have been a hell of a shock for the doctor. I mean, Athena supposedly sprang full-grown from Zeus’ forehead, and the Buddha is reported to have come from his mother’s side and taken seven steps in each of the four directions. But this is the first time I’ve ever heard of a woman giving birth to a pole dancer.

Anyway, she agreed to have ultrasound to prove that her assets are her own and not aftermarket add-ons. And, this being America, she did so on TV. She and her dad – I mean, her husband – went on Dr. Drew’s Lifechangers, where plastic surgeon Dr. John “For This I Went to Med School?” Diaz performed the procedure.

And the verdict? The doc says they’re real, and he should know. As a plastic surgeon he’s dealt with a lot of fake boobs. And speaking of fake boobs, Stodden and her husband hope to star in their own reality TV show.