Guys, what’s your greatest fear? Going bald? Having a colonoscopy? Being French kissed by Madonna?

How about getting your balls crushed by your pants?

If that last one is an issue, Lulelemon has your back (so to speak). 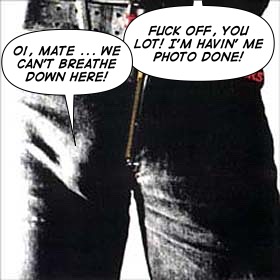 I always buy clothes that actually, you know, fit me properly, so this has never been a problem. But apparently it’s a big enough issue for some guys that Lululemon (yup, the see-through yoga pants Lululemon) has introduced a new line of trousers that won’t be bad to the ‘nads.

Called the ABC Pant (ABC stands for anti-ball crushing –– I kid you not), the $128 trousers are engineered to give “you and the family jewels room to breathe,” according to the company’s website.

This is kind of confusing; for one thing, testicles don’t breathe. Secondly, if your trousers are keeping you from breathing freely, you’re wearing them wrong.

When I read this story, a couple of things crossed my mind. The first was the famous adage about a fool and his money. The second was how this ABC thing might have affected the history of art had it taken root earlier. There would be no paintings of small men with ridiculously outsized codpieces. Nor would there be Jacques-Louis David’s famous portrait of Napoleon Bonaparte.

But perhaps most importantly, the cover of the Rolling Stones’ Sticky Fingers would be much different. BTW, I learned only recently that the crotch immortalized there is not Mick Jagger’s, as I had always assumed; it actually belonged to one of photog Andy Warhol’s entourage. Apparently, Jagger can be an enormous prick, but  …

But back to the pants. Some guys are really happy with them, and rave about them on the company’s website.

One reviewer said, “They are the most comfortable pants I have ever worn. They are extremely versatile. They can be dressed up or down.” In other words, they’re like the classic Little Black Dress, only for guys, crazy pricey, and ugly.

Two reviewers called the pants “fantastic” and several said they wear them to work as well as to the gym. I’m calling bullshit on this; I’ve never seen pants a guy could wear to work and to the gym – unless he worked at the gym.

“I love these pants,” one reviewer wrote. “I wear them as casual, for work (I am a financial advisor) and I wore them to yoga once just to see how flexible they are and they were excellent.” This is also questionable; anyway, I would not trust a financial advisor who wears the same pants everywhere he goes.

Some complained about the slim fit –– a fit that would seem to contradict the company’s promise that the pants allow for breathing room. It’s not clear how they reconcile the two attributes; maybe they use a snorkel.

While most of the reviews on the site are positive, one is straight creepy. One mom writes: “My 16 YO son LOVES these pants!!! He is a hockey player and has the bubble butt …” First off, I want to know how come mom knows so much about bubble butts. Secondly, I also want to know why she’s paying so much attention to her son’s ass. On second thought, maybe I don’t. At least she didn’t mention his snorkel.