I’m not much of a football fan but I’m familiar enough with the sport to know it involves a lot of cryptic abbreviations: QB, TD, RBI (OK, that last one doesn’t look right).

Last Sunday, when the biggest football game of the year was being played in New York, my go-to acronym was BFD. While millions of Americans were observing Super Bowl Sunday in countless living rooms and bars across this great nation, I was making a delicate béchamel sauce for the spinach-mushroom lasagna Liz and I would enjoy while watching our favorite soap opera, Downton Abbey. 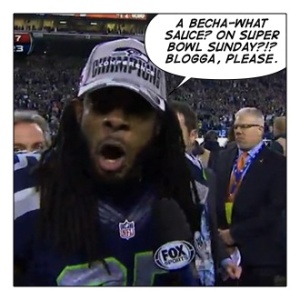 I’ve never been into sports, which explains why I was never much of a jock. I did play baseball when I was in grade school. The sad highlight of my career was a game in which we were thrashing the opposing team so soundly that my coach, in a fit of sheer desperation, sent me in to pitch.

Two tosses into my first (and only) inning I beaned the batter and was promptly and permanently benched. Given the strength of my arm, I doubt the kid even knew he had been hit until the ump told him. But that ended my pitching career almost before it got started.

College was no different, unless you count cutting class and Frisbee tossing as sports – in which case, I lettered in both. I did, however, play foosball. That career was cut short when, following a game-winning goal and ensuing victory dance, my Birkenstocks got hung up on the shooting rods and I fell off the table. Not only did I spill my beer, I also broke my shooting wrist; that put an end to a career that promised to keep me in Bud (and bud) all the way through grad school.

These days, Liz and I will usually watch at least a few minutes of the game, if for no other reason than to catch the commercials. Of course, no Super Bowl is complete without some group of mouth-breathers getting their collective panties in a knot over a commercial in which something was done (or possibly not done) that profoundly offended them. In this respect, Super Bowl 2014 did not disappoint.

This year, Coca-Cola’s polyglot “America, The Beautiful” had the über-patriots gnashing their teeth and rending their garments because it featured people singing our song in their languages and not in American.

Their beef seemed to be that if you’re going to advertise during our nation’s biggest religious observance, your commercial should be in the language of the first people to land on these shores. Depending on which historian you believe, that’s probably either Chinese or Danish, so I don’t get the heartburn.

In a culture that glorifies sports and gives the side-eye to anyone who doesn’t,  a card-carrying non-fan can’t be faulted for trying to “pass.” However, this can be a minefield, as I found out Sunday.

I was walking the dog when I ran into a neighbor. At one point in our ensuing chat I asked him, as us manly guys are wont to do, who he liked in the Super Bowl.

I fully expected a simple response, like, “Gotta go with Denver” or maybe “Seattle’s looking good,” but what I got was a five-minute deconstruction of each team’s strengths and weaknesses, and no fewer than three scenarios that could send either team home with some seriously ugly jewelry.

I was about to make a break for it when he asked me the question I had been dreading since he launched into his dissertation: “How ’bout you?”

I’m a pretty good bullshitter but I don’t know enough about football to fool a six-year-old, so I went with what I had at hand: “Dude, my béchamel’s not gonna stir itself, and you know how that shit scorches. I gotta go. Catch you later.”